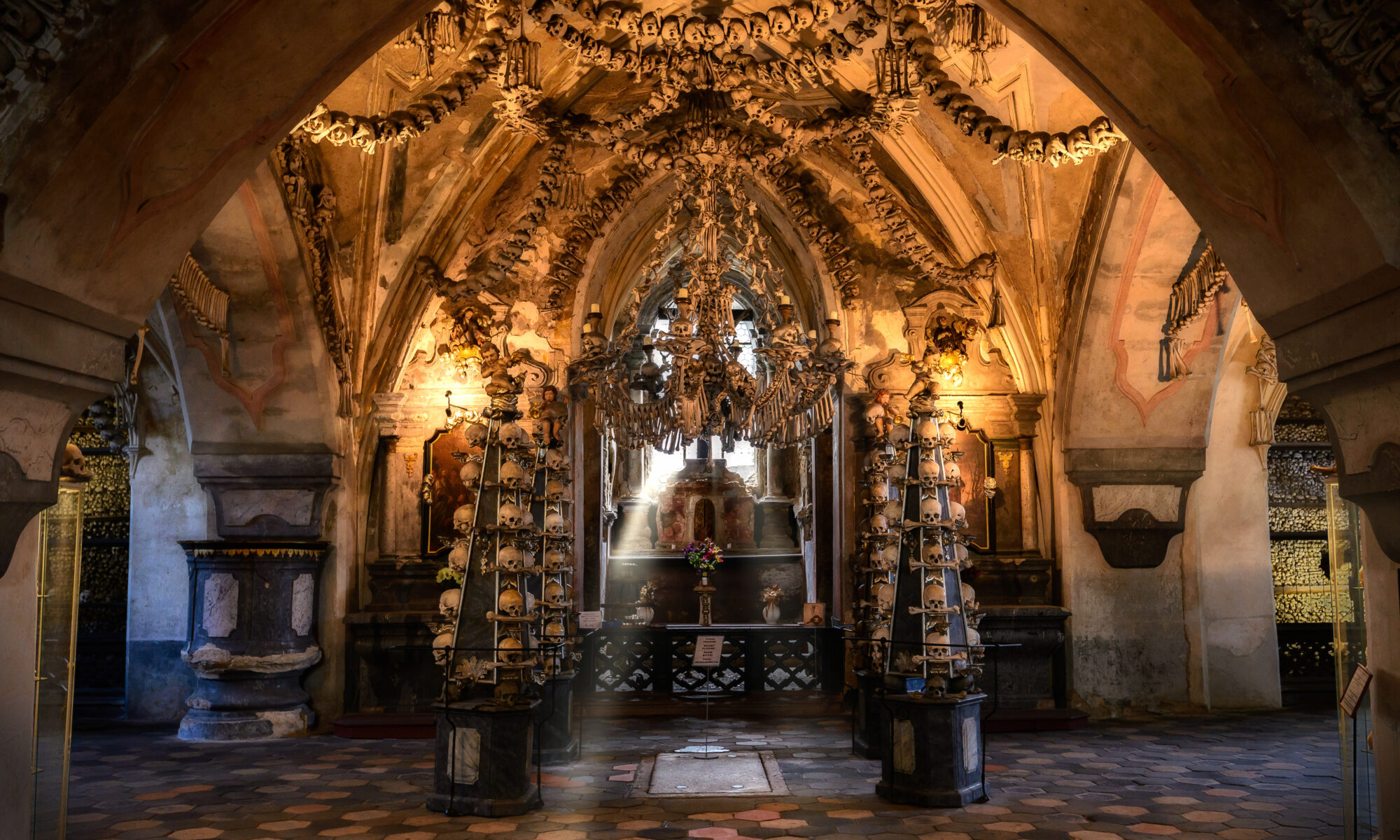 The BA course “Profile Seminar: Cultural Heritage” taught by Suzie Thomas, focused on difficult and ‘dark’ heritage. Students were asked to seek a case study which interested them and to discuss it as a form of dark tourism, looking at the nature of the site as well as potential suggestions for its future presentation and treatment.

Here you can check the assigments of two students.

Eefke Boezen dove into the Dark Tourism of Mariënburg and made a video blog post.

Emmeline Verheij chose the topic of the Sedlec Ossuary based in Kutná Hora, Czech Republic and wrote the following:

“The Sedlec Ossuary based in Kutná Hora, Czech Republic is an (in)famous Roman Catholic chapel in which 40,000 – 70,000 disarticulated human skeletal remains make up the chapel’s interior installations. These remains date between the 13th – 18th century. A woodworker, Frantisek Rindt, was in 1870 employed by the Schwarzenberg family from Orlík to artistically arrange the bones housed in the chapel and is responsible for the chapel’s current interior design. The sacred funerary site falls under the category of a thanatouristic attraction.

Critics question the ethics of displaying human bones in such a manner and the human rights of the dead (Pratt et al., 2019; Perreault, 2018; Walker, 2008). For previous identities of the deceased become anonymous when incorporated into these mass ensembles.
To discern whether these concerns are on solid ground, the death culture of Catholic Europe must be analysed.

The curation of human skeletal remains is because Sedlec was Central Europe’s most desirable burial grounds for its soil, the “terra santa”, which was brought from the Holy Land in the 13th century. To prevent cemetery overcrowding the secular ossuary, like other ossuaries and charnel houses spread across Christian Europe, was erected out of practical but also eschatological reasons.

For the physical and spiritual proximity between the living and the dead was much closer pre-twentieth century. Human bones served as a social nexus on this relationship and the ontologies of morality; a meditation on the fragility and transience of material life and enduring spiritual life. As part of the ‘corpus mysticum ecclesiae’ the faithful shared a common destiny and were expected to give communal spiritual support in the preparation for the afterlife and the care of the dead.[1]

This was as such expressed in the synthesis of the arts in religious architecture that as a whole represented the transitory stage to heaven. Exhumation and reburial within sacral architecture were additionally recognised as rites of secondary treatment; a vital stage in the leave-taking of the living from the dead.[2] Many ossuaries were not just repositories of bones but actually served as early memorials and sites of commemoration; life-affirming of nature rather than death-reminding, expressing eschatological hope of resurrection.

Although bones oscillated throughout the centuries in their status as subject and the object, early modern Europe did not completely divorce from the medieval death culture of bones operating as relational entities, rather it was a case of ideas being ‘long durée’.[3]  In the 17th century it was prevalent to believe that the deceased simply didn’t disappear; that while all the flesh disappeared the soul remained in the body, which is why it should be conserved and displayed.[4]

Ossuaries became performance sites where the human body was used as an element of exposition and decoration. The evocation of the souls of the deceased ‘living on’ was performed via making bones into works of installation art in intricate compositions of repetitive patterns for a more immersive perceptual experience. Rindt was operating within what was by then a well-established tradition. The idea of an ‘ossuary’ is related to the ‘substance’ kept in it, and not the form of that ‘container’, nor the material of which it is made.[5]

The sacred nature of decorative ossuaries and their message of hope in resurrection is often difficult to grasp for the modern visitor. This paradigm shift in the attitude to death occurred in the first half of the 20th century. The progressing professionalization of modern medicine and the secularization transformed the spiritual experience of death which in turn led to the deritualisation of death and the privatisation of mourning. Because of medicalization, death stopped being a ritual and instead became a technical problem, and shifted from a public affair within communities to a private matter in concert to the introduction of a new culture of memory. As a result of this detachment, previous cultural values of treatment and care for the dead are now lost to the modern visitor, and the nature of ossuaries and charnel houses are in contemporary context regarded as dark and disturbing.

The religious thanatoptic displays are part of the sacral character of the chapel and make up its identity. Its collective body stands for the common destiny all Roman Catholic Christians shared. Therefore this ought to be left unchanged. The solution lies in elucidating the nature of decorative ossuaries to mitigate Sedlec Ossuary’s status as a dark heritage site. Although visitors are given information sheets upon entry, non-visitors aren’t able to read into this information with the exception of academic sources on the condition that they purposefully search for it. A lack of accessibility and superficial information lead to misrepresentation and misconceptions. Therefore it would be conducive to make more (thorough) information public so that the average person gets a better and broader understanding of the purpose of ossuaries. For memento mori carries more than just one meaning.”

[1] Albrecht Classen, Death in the Middle Ages and Early Modern Time: The Material and Spiritual Conditions of the Culture of Death (Berlin: De Gruyter, 2016), 7, 23, 308.

[5] Tomasz Kozłowski & Małgorzata Grupa. “Cognitive Values of Ossuaries from the Cemetery and the Church of St. Nicholas in Gniew, Poland.” Fasciculi Archaeologiae Historicae 33 (2019): 33.

Avakian, Sylvie, Being Towards Death: Heidegger and the Orthodox Theology of the East, Berlin: De Gruyter, 2021.

Classen, Albrecht, Death in the Middle Ages and Early Modern Time: The Material and Spiritual Conditions of the Culture of Death, Berlin: De Gruyter, 2016.

Kozłowski, Tomasz & Małgorzata Grupa. “Cognitive Values of Ossuaries from the Cemetery and the Church of St. Nicholas in Gniew, Poland.” Fasciculi Archaeologiae Historicae 33, 33-52 (2019).

Murray, Sarah, Making an Exit: From the Magnificent to the Macabre. How we Dignify the Dead, London: Coptic Publishing, 2011.

All the images used in the article belong to their respective owners and the author does not claim any right over them.