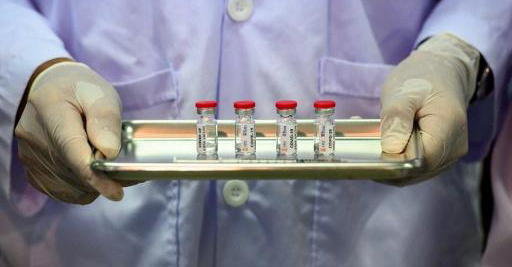 Currently,  different vaccines with different storage conditions are distributed among 150 vaccination centers in Belgium. The Think Tank Vaccine Distribution investigated which parts of the complex chain could be cut out to make the chain more effective. Or: How can we spare the already busy hub hospitals, and how can we minimize the loss of vaccines? Because the more complex the chain, the more vaccines could be lost due to miscounting, mishandling, etc.

“In logistics there is a universal law that states: the more intermediate steps, the more mistakes there can be statistically.”

Healthcare personnel and hospitals have been under serious pressure. Currently, hospitals are still widely used as vaccine hubs. According to logistics theory, this is an additional and inefficient step. Our proposed strategy focuses on scenarios that relieve the burden on hospitals, combined with reducing risks in the distribution of vaccines. Although the parameters are subject to change, we distinguish two scenarios:

The scenario in which hospitals take an active role seems to be a logical choice. At the same time, this creates additional activity in hospitals whose capacity is already under severe pressure. It is all the more likely that they will give priority to providing care rather than to preparing and distributing vaccines. And apart from the workload, additional operations and transports could also result in damage or loss of vaccines.

Workload and loss of vaccines

To build the scenarios respectively with and without hospitals, a number of known data and assumptions were used, as indicated in Annex 1. Two parameters were considered:

This is based on a number of studies that indicate that adding additional intermediate stops can increase the so-called ‘failure rate’ and ‘deterioration rate’ in refrigerated products. A study by Vogt (2010) shows that the two most important parameters in determining a hub are ‘suitability of building for logistics’ and ‘quality of personnel’ for performing logistics operations. 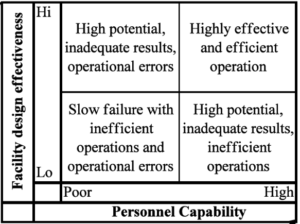 “We have absolutely no doubt about the quality of personnel in both hub hospitals and pharma logistics companies. However, we make the assumption that a hospital is not built to serve as a logistics hub where tens of thousands of vaccines per day need to be handled.”

Both scenarios were calculated using the MooV optimization model. The model was developed by VITO and can solve complex distribution and supply chain scenarios. The figure below shows the scenario with hospitals (left) and the scenario without a hospital hub (right). 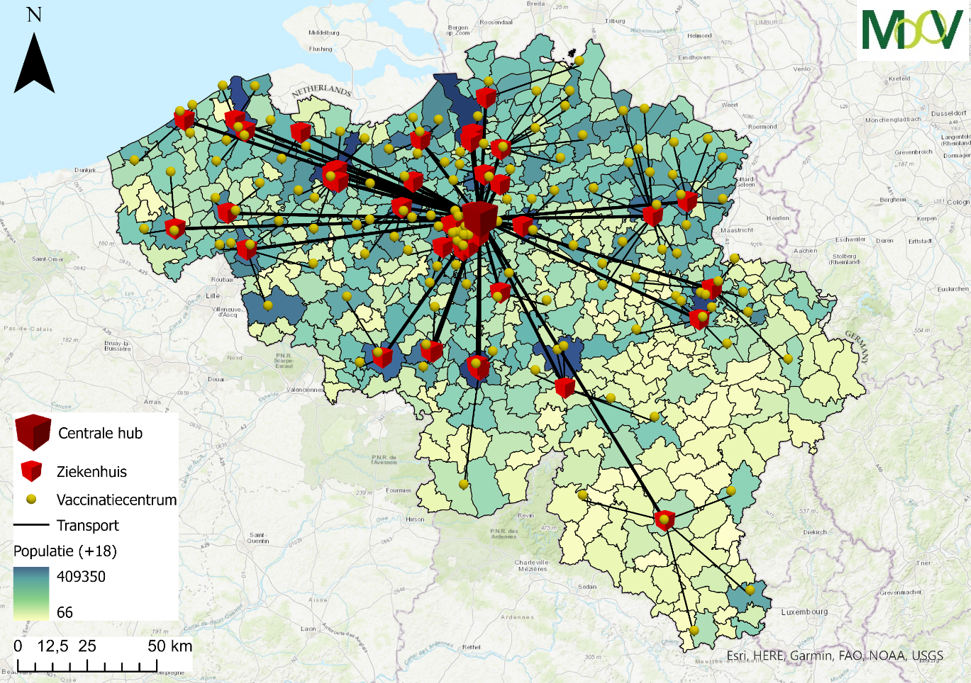 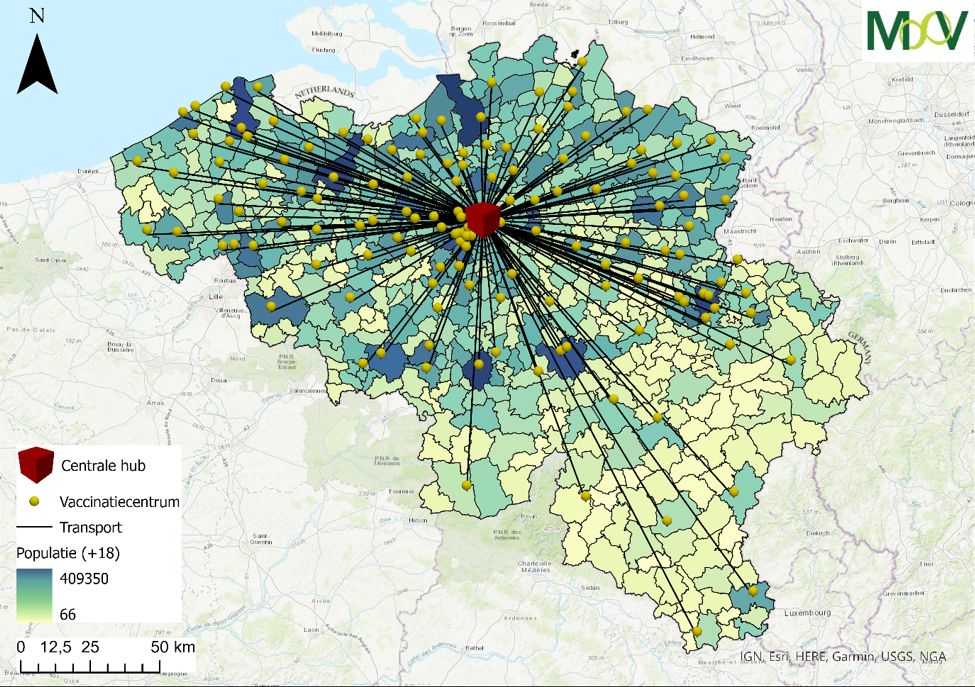 The results of the calculations based on the above assumptions show that in a scenario with hospitals, 140 hospital staff members are tasked with handling the vaccines on a full-time basis. These employees are therefore not available for care tasks. In the other scenario, vaccine handling is centralized in a central hub. The same tasks can be handled by about 50 additional specialized employees from the pharmadistribution sector.

Using hospitals as distribution hubs initially seemed a logical choice for storage and distribution of vaccines. However, the increased workload for the hospital staff (140 employees) and an increased risk of losing vaccines (190,000 vaccines) must be taken into account. Working with one central hub undeniably leads to better results.

However, a vaccination campaign on such a scale and a corresponding distribution strategy remains an absolute hurdle in both scenarios. There are still many uncertainties. In addition, variants of the discussed scenarios can also be calculated. We are thinking of not one but a limited number of central hubs in function of the respective vaccines or calculating the impact of a change in the choice and delivery of vaccines on the entire vaccination strategy.