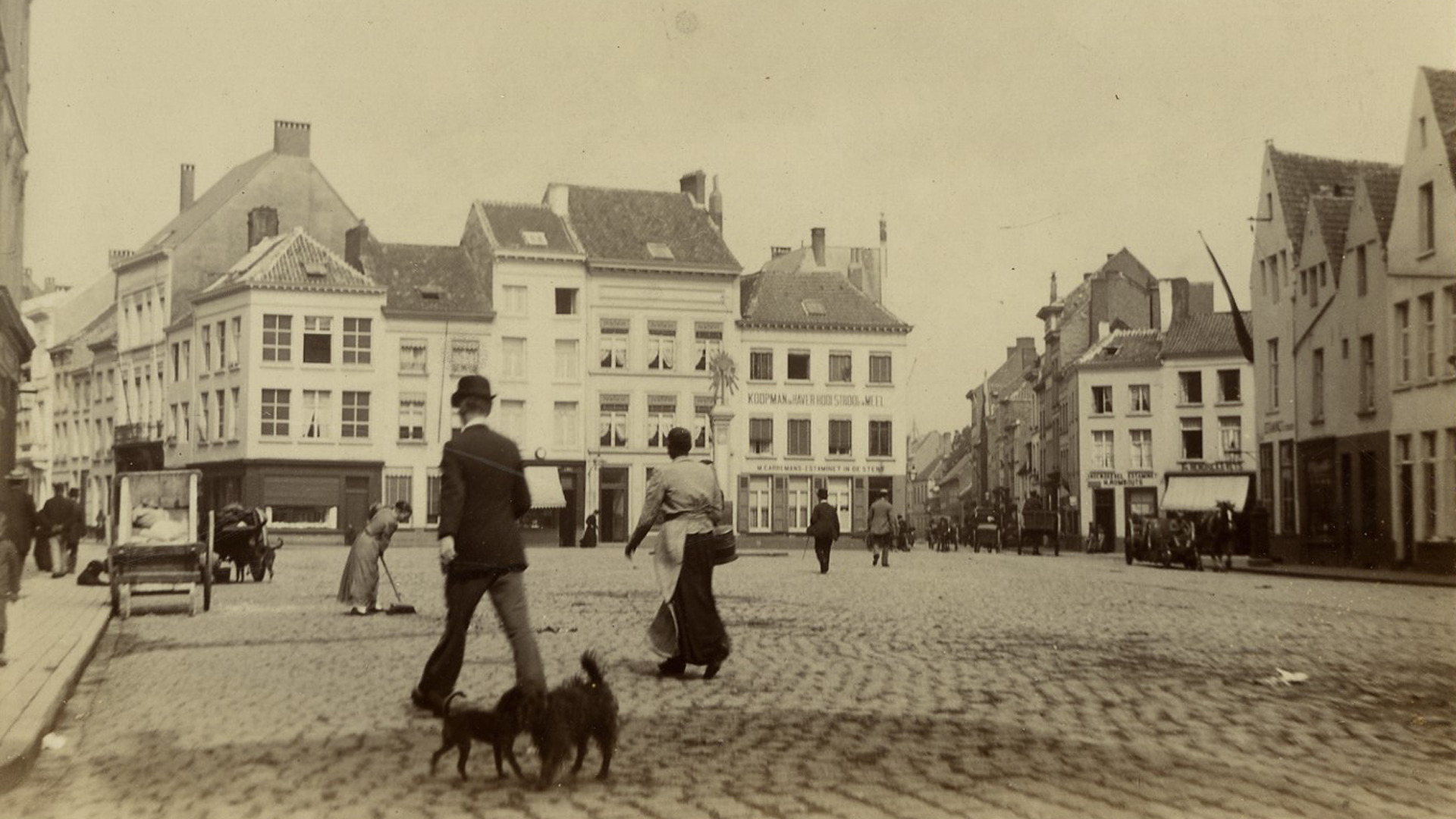 The opening of the new academic year is the perfect moment take a moment to look at the familiar streets and squares of our Stadscampus through a different lens: Rector Herman Van Goethem guides us along seventeen special locations with the aid of an app and old photos.

Install the free izi.TRAVEL app and scan the QR code: that’s all you need to do to start a tour in the virtual company of Professor Herman Van Goethem. The tour leads you from the Central Station along the Kipdorpbrug, the Italiëlei and the Paardenmarkt to Stadscampus. At seventeen locations, the app will show you one or more photos of the location from a century to a century and a half ago, supplemented by explanations from the rector about building styles and building history, historical background and other surprising facts. The audio clip starts automatically every time you approach one of the sights. The entire walk takes about one and a half hours. The audio tour is only available in Dutch but we give you a summary in English.

The walk starts at the Central Station, then goes to the Frankrijklei and the Antwerp Opera, after which we literally stop at the Franklin Rooseveltplaats – formerly the Geuzenhofkes – and Kipdorpbrug. With the busy traffic on the Leien, it is hard to imagine that there were once canals and Spanish ramparts here. After the demolition of the city walls and gates in the 1860s, an extensive boulevard was built was partly due to hygienic considerations: the wide road was supposed to prevent infections from literally wafting over from the densely populated inner city to the chic new residential areas outside the city ring.

From the Kipdorpbrug, we continue our journey along the Italiëlei, where the rising middle class settled down at the end of the nineteenth century. The stately mansions of the period are an attest to this, which were ‘built as if the occupants were 2.5 metres tall’. Along the Paardenmarkt we end up in the Rodestraat, where at number 14 the convent of the Sisters of the Immaculate Heart of Mary made way for the austere blocks of the university in the early 1970s. The rest of the street has lost little of its original appearance because the neighbourhood was largely spared destruction during the World Wars – and there was no budget for expensive renovations either.

The Ossenmarkt too still looks surprisingly similar to its ancestral version, with a fully preserved row of houses on the short side of the square. From there, through the Pieter Hobokenstraat, the tour takes us to Prinsesstraat, which at the time had to make do with the less regal name of ‘Paddengracht’ (Toad Canal), a reference to the damp soils on which the entire district was built. For anyone who has ever wondered how the apothecary’s house came to have this statue of Mary: the work of art survived the demolition of the neighbouring ‘broodjeskapel‘ (sandwich chapel) and was given its new, current location across the street.

There is no nicer place to end the walk than at the Hof van Liere. The large courtyard, the oldest part of which dates back to the 16th century, looks as though it has retained its grandeur after all these years, but don’t be mistaken. As Herman Van Goethem explains, the Jesuit Fathers dug deep into their pockets in the 1930s to restore the building and its gallery to their present appearance – the extensive restoration work was only paid for in full in the early 1970s. All the more reason to pay a little more attention when you look at this historic site, the next time you pass through.

Curious? Then install the app and download the walk via this link or scan the QR-code: