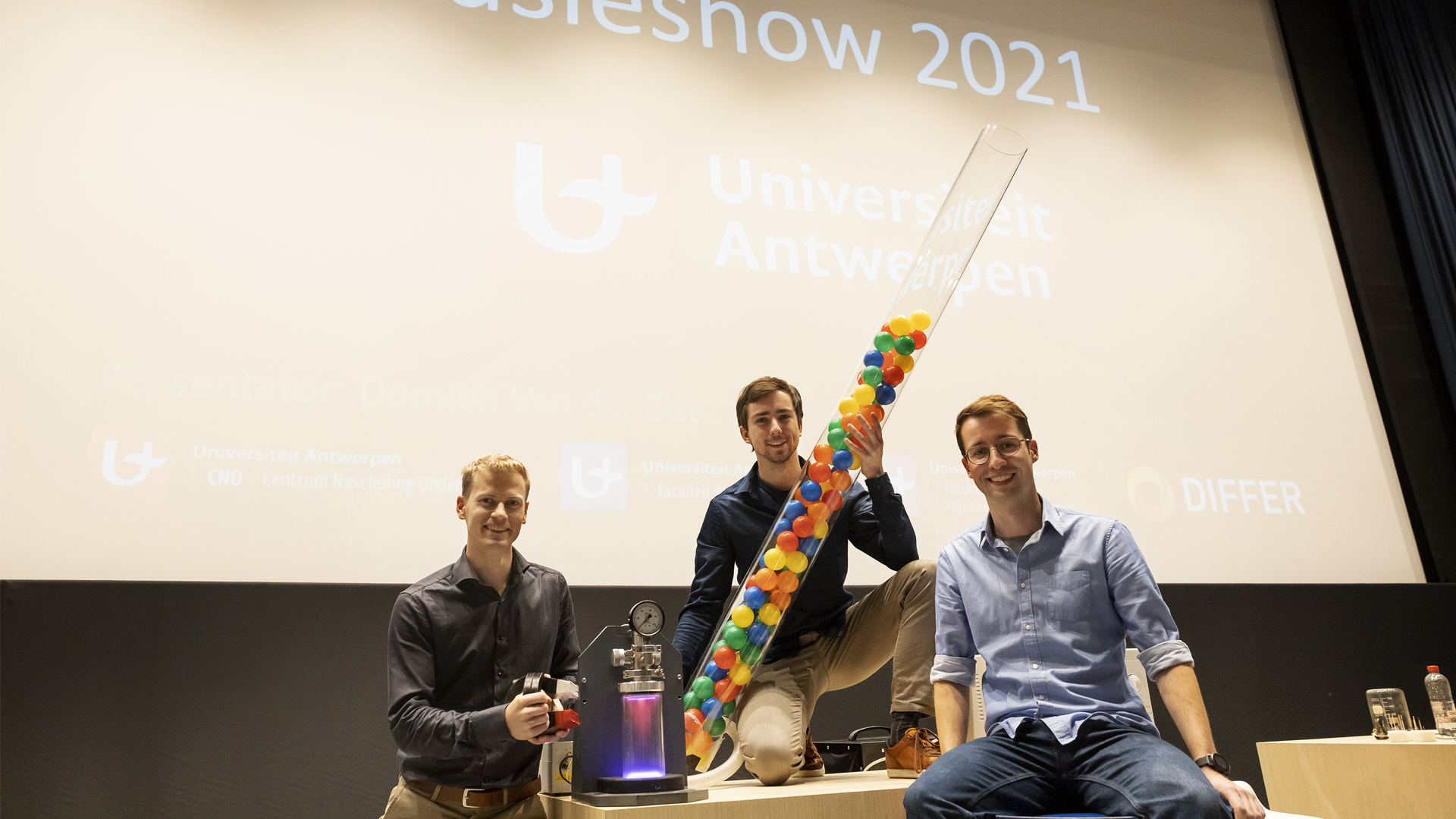 The upcoming edition of the Fusion Show will for the first time be presented by three of our own researchers, who followed an intensive coaching programme. ‘The past few months have been quite an adventure. But once you’re on that stage, the stress melts away’, said one enthusiastic researcher turned presenter.

On 18, 19 and 22 November, the Fusion Show will welcome some 3,600 secondary school pupils from the fifth and sixth years for a surprising show about sustainable energy and nuclear fusion. ‘The aim is to raise interest in science and to make young people aware of the great potential of nuclear fusion. The fact that this also makes students want to come and study science at our university is a bonus, but certainly not the primary objective’, says Joris Baeten from the Faculty of Science, who is organising the event with the In-service Teacher Training Centre (Centrum Nascholing Onderwijs, CNO) and – for the first time – the Faculty of Applied Engineering.

The novelty of this year’s show is that three of our own researchers will take the stage. This is a matter of necessity, Joris admits. ‘The Fusion Show is an initiative of DIFFER, the Dutch Institute for Fundamental Energy Research, which hosted the show for many years. At first it was only hosted at secondary schools in the Netherlands, and later also at our university at our request. But about a year ago, they informed us that they were quitting. It was a hard pill to swallow, but we soon saw it as an opportunity. Why not take the presentation into our own hands? A leap into the unknown, but we decided to take our chances.’

Together with CNO and the presentation coaches of The Floor is Yours, Joris and Cecilia Coppens from the Faculty of Applied Engineering worked out an intensive coaching programme. A call in spring prompted a dozen responses. Joris: ‘That response was at the same time surprising and not surprising at all. The new generation of researchers realises that they need to let the world know of their work. The time of professors not getting up from behind their desk is over. We also owe this communication to society, which gives us the means to do science. It is a form of service provision, one of the core tasks of our university.’

The candidates were invited to a workshop, which was also a selection round.  ‘Everyone brought a piece of the show’, says Toon Verlinden from The Floor is Yours. ‘We paid attention to several things. Does the researcher feel comfortable in front of an audience? Can they improvise? Do they come across well? And, of course, the presenter has to know how to motivate the audience, because you’re in front of a few hundred teenagers.’ The choice eventually landed on PhD student Lennart Fernandes, PhD and postdoctoral researcher Yannick Engelmann and lecturer Domien Van der Elst. Moreover, a dozen colleagues showed that they are willing to do additional presentations.

As a researcher for Plasmant, a research group in the Department of Chemistry, Yannick had already seen the Fusion Show a few times. ‘I was usually behind our info stand, but took advantage of being there to attend parts of the show. And before I knew it, an hour had passed. So I thought it would be nice to present the show myself now. I am used to presenting at conferences, but this is completely different. You don’t want to bombard the pupils with information; you want to make them look at energy in a different way.’

‘Behind the scenes, I could only think “what have I gotten myself into?”. But as soon as you are on stage, you feel so much positive energy that you immediately lose that fear.’

Lennart, an FWO aspirant in the research group TQC (Theory of Quantum Systems and Complex Systems) of the Department of Physics, was also already familiar with the Fusion Show. He strongly believes in the concept. ‘The show demonstrates in an accessible way that science is sometimes a bit crazy and that it is mainly about people working together. Afterwards, you always have a room full of enthusiastic seventeen-year-olds. I wanted to be the face of such an initiative.’

As a physics lecturer at the Department of Movement Sciences and Physiotherapy, Domien is also used to speaking in front of large groups. ‘It also helps that I tutor secondary school pupils: that way I am well aware of their level of knowledge.’

Familiar show with a new look

Each of them will present two shows. The existing show has undergone quite the transformation. They expanded the section on nuclear fusion, looked more closely at nuclear fusion in the sun and placed nuclear fusion in the wider context of renewable energy. The PowerPoint presentation has also been thoroughly revamped. ‘We started with one slide, but before we knew it, we had to do the whole presentation’, Yannick laughs. In all of this, they received a lot of help from UAntwerp alumna doctor Maja Verstraeten, who does research on nuclear fusion at the Royal Military Academy. ‘As a content expert, she was always ready to answer our questions, allowing us to update the show from a scientific point of view’, says Domien.

Although they each have their own style and approach, they will present one and the same show. Tips and jokes were readily shared. ‘We tried to come up with the best possible presentation together. That’s what made it fun’, says Domien. Cecilia is happy to see how they became a close team over the months. ‘There was no hint of competition.’

Speaking in front of an audience: the golden tip

They learnt a lot from Toon’s coaching sessions. ‘I am not a natural fan of these things’, Lennart admits. ‘But I quickly had to reconsider my opinion. Toon started with his own presentation and it was an immediate hit. If we can present the show this way, it will be all right, I thought.’

Throughout the process, Toon saw the three researchers evolve. ‘The content was already there, so the biggest challenge was to make the most of it. All three of them were already talented public speakers, but they really pushed themselves to do even better. I mainly gave feedback and tips. The main challenge: to convey the passion you have for your subject to your audience. No one will be as enthusiastic about your research as you are, but it helps tremendously if you stand there with joy.’

The result of all that hard work is worth it: this year’s Fusion Show will yet again be a varied performance with lots of interaction, short films, animation and experiments. Before and after the show, students can get their bearings at information and demonstration stands. The schools could also sign up for an additional optional activity: The Big Energy Quiz or the Energy Pitches, TED Talk-like presentations by researchers, lecturers and professors led by Professor Steve Vanlanduit, Vice-Dean of the Faculty of Applied Engineering. Both revolve around energy production, energy consumption and energy storage. And schools could also request a quest kit.

‘The time of professors not getting up from behind their desk is over.’

The teachers were able to follow a training course provided by Maja Verstraeten through CNO. This allowed them to prepare their students for the show and to integrate the theme into their curriculum. Yannick, Domien and Lennart were also present. ‘This is useful for when we get questions after the show’, says Yannick. Cecilia and Joris are perplexed. ‘You took that refresher course too, right? (To us) Look, that just shows how big their commitment is. They have latched on to it even more than we had dared to hope. For me, that is the biggest surprise of this whole project’, says Joris.

A good week after our conversation, on 3 November, the team reunited for the dress rehearsal. Among the critical audience were Professor Nick Schryvers, Pro-Dean of the Faculty of Science, and Katleen Huyghe, who is replacing Joris during his paternity leave. Domien starts the show. The energy is good throughout the show, Cecilia says afterwards. A round of feedback follows. Shouldn’t there be more moments of rest? Can the volume of the films be set louder? And yes, that bar stool on the stage is a bonus. ‘Try to connect more with a 17-year-old’s world’, is Joris’s tip. Domien resolves to put in some more jokes. ‘But it will work better with a real audience’, he winks.

Halfway down the hall we meet Kim Van Den Ouweland of CNO. She is very happy with the new presenters, she says. ‘It’s nice that we are doing it ourselves from now on and that there are young researchers on stage. They put their best foot forward.’ She notices that schools appreciate the initiative more than ever. ‘This also has to do with the new curricula, in which sustainable energy is becoming an increasingly important issue. The event is inspiring for the students, but certainly also for the teachers: don’t forget that they have often been away from university for many years. The Fusion Show gives them a taste of current research. The training course was also very well received by the teachers.’

After Domien, Lennart steps onto the stage. Feeling quite nervous, he admits afterwards. ‘The closer the day of rehearsal, the more stressful it became. Behind the scenes, I could only think “what have I gotten myself into?”. But as soon as you are on stage, you feel so much positive energy that you immediately lose that fear. It is just fun to do.’

Now that the pieces of the new formula seem to be falling into place, the team has started to dream of a successful restart. The turnout will not be causing a problem. For this edition, schools from all over Flanders, from Opgrimbie to De Panne, registered to attend. ‘In total, we have six shows for 600 spectators each’, Cecilia adds. ‘Just like in the past, we have had to refuse schools because all the places were full.’

Want to know more about the Fusion Show? Read more on their website (info in Dutch).