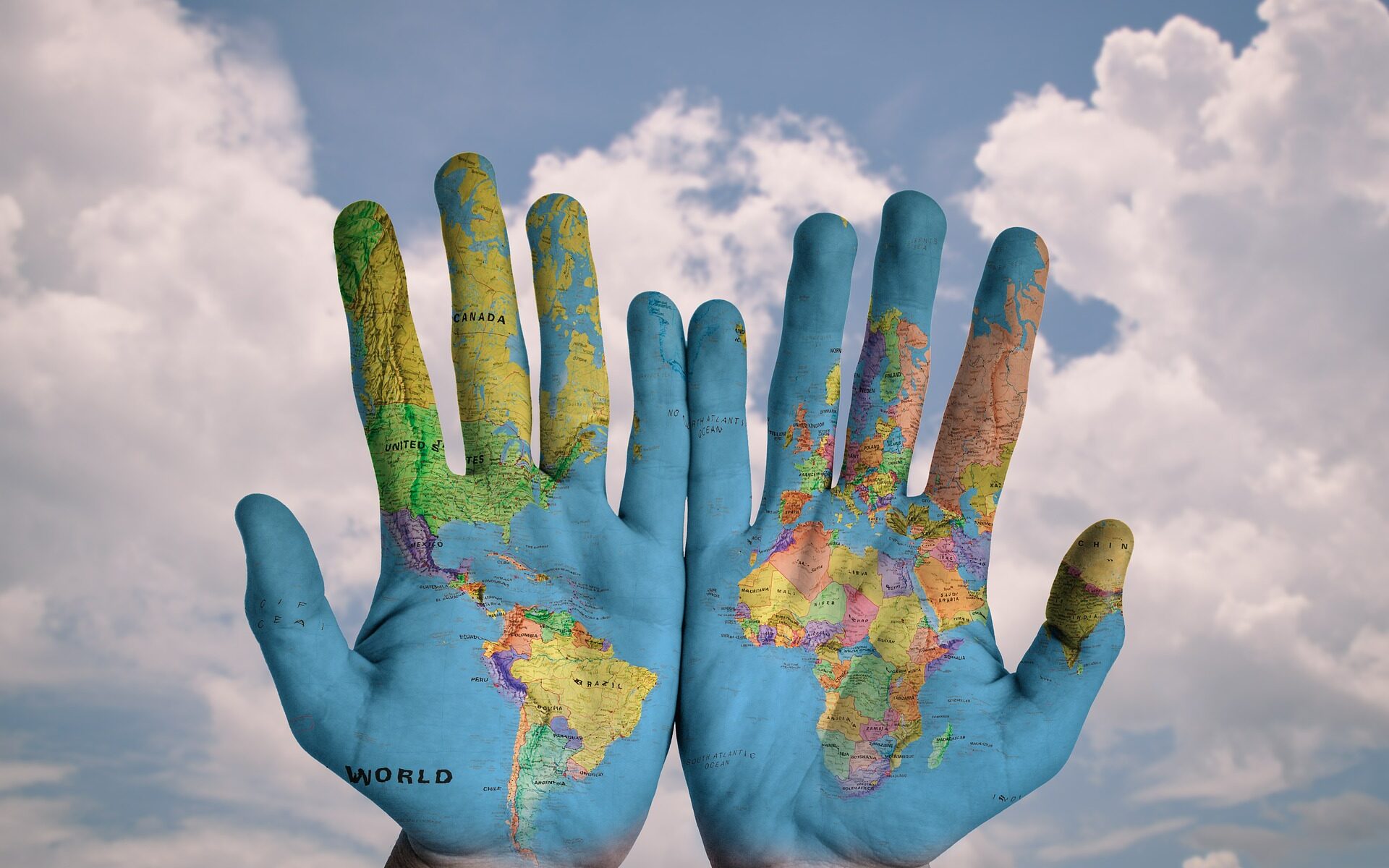 Students in our Master in Globalization and Development are encouraged to think critically about the challenges our globalized world faces. Coming from different corners of this world, they settle in Antwerp for one year. In neighborhood food stores, in beauty salons, in the university corridors or walking along construction sites, they may see migrants at work. What challenges are these workers facing? And what does this have to do with globalization?1

In January and February 2021, twelve students who followed the subunit ‘Global organization of production’ participated in a research project on migrant workers. In the subunit we discuss how global production has become geographically fragmented in Global Value Chains (GVC), how value is distributed between GVC actors, and how countries, firms and workers can create and capture more value added. The latter is a process of economic upgrading, which is commonly associated with social upgrading: improvement of working conditions and workers’ rights. In the subunit we pay special attention to the position of workers in GVCs. For this, we revert to the ILO’s Decent Work agenda, but also take a critical look at how structural dynamics within the current capitalist system result in systematic exploitation of workers.

In line with ILO Convention 143 (article 11) we defined a migrant worker as “a person who migrates or who has migrated from one country to another with a view to being employed otherwise than on his own account and includes any person regularly admitted as a migrant worker”. To learn about the situation in Belgium we reached out to Fairwork Belgium, a Brussels-based organization that assists workers and lobbies for workers without residence permit or with precarious residence status.

To kick off, coordinator Jan Knockaert gave a comprehensive lecture on the labour rights of undocumented migrants in Belgium. Labour rights for workers include minimum wage and wage protection, compensation in case of accidents, respect for maximum working hours, no arbitrary dismissal, and paid holidays. These should be protected for (undocumented) migrant workers just like for any other worker. Yet the problem is that migrant workers are generally not informed about their rights, nor do they know where to file a complaint. They are often afraid to report abuses out of fear of being deported and highly dependent upon their employer. As the employer is the one who applies for the work permit, this leaves workers in a very vulnerable position.

The precarious situation of these migrant workers makes them vulnerable and, as one master student put it, almost “invisible”. Many are afraid to lose their job or be deported when they talk, when they are seen. For this reason, finding migrant workers who were willing to participate in an interview, was not an easy task. Covid-19 made the situation even worse. Not only did the pandemic push people further into vulnerability by taking away their jobs, also in a practical sense it became difficult to arrange for interviews. But thanks to the flexibility and creativity of the students and the help of Fairwork Belgium, Sara Dewachter and IOB alumna Lilian Ogolla, twelve students were eventually able to interview 25 migrant workers from 18 different countries of origin. Some interviews took place online, others in a Covid-safe face-to-face setting. The students’ findings were also discussed with Belgian students of the Master in Social Work (University of Antwerp), which allowed us to enrich each others’ perspective

The interviews were set up as life histories. We first asked questions about life ‘before migration’: what was family life like, social life, what did they do for a living, what skills did they acquire, did this allow them to live properly, did they see a future for themselves there, what problems were they facing? Second, we asked about the decision to migrate: why and when was this taken, how did family and friends react, was Belgium the destination they had in mind? Third, we asked about the migration trajectory: how did they travel and what challenges did they face? Next were a series of questions about life in Belgium, focusing on work, but also addressing broader questions around social relations and wellbeing. We also specifically inquired about the impact of Covid-19. We closed the interview with some questions about their imagined future: What’s your dream job? What life do you imagine for your children? Do you envisage going back home? And what advice would you give to someone who wants to migrate to Belgium? All students used the same interview guide, which was drafted during a brainstorm session in class. In this series of blog post, all names have been anonymized or pseudonymized.

What did we learn?

Students were encouraged to link the personal life histories with structural dynamics identified in the literature. Six topics were identified across the different interviews: 1) the meaning of forced labour, 2) access to work, 3) discrimination and intersectionality, 4) exploitation in the workplace, 5) resilience and mobility, 6) social upgrading strategies.

Following LeBaron et al (2018: 12) a “positive theory of freedom” is anchored in the power to say no. This means that the idea of forced labour cannot only be applied when an employer coerces a worker into work for which the worker has not offered himself voluntarily (based on the ILO definition). It means that people can be coerced into situations of exploitative or forced labour because they lack alternatives. We documented stories about human trafficking, such as the story of an Ecuadorian woman who was trapped into a slavery-like job by a network that took her papers as soon as she arrived in Spain. Other people do not experience physical coercion and seem to move out of free will. But they are still forced to accept work – even when it is low-paid or does not fit their skills or expectations – because they have no alternative. They lack the power to say no. Many interviewees have stressed that they had no choice but to accept “ridiculous jobs”, as one high-skilled male migrant said. Most of the time, these jobs do not fit the qualification and skills level the migrants have gained.

This relates to the second point about access to work. It has been documented that high-skilled migrants in Belgium more often end up in low-skilled positions than the native population (Eurostat, 2017; Geets, Timmerman & Mortelmans, 2011). They are often overqualified, but cannot find a job that matches their qualification. This can be due to political decisions such as the non-recognition of their degree or labour market requirements such as the need to learn Dutch or French, the official languages in Belgium. But it can also be due to blunt discrimination in recruitment offices, which is based on name or appearance.

The third point many interviewees highlighted related indeed to discrimination. One of them experimented for themselves with a test that aims to reveal discriminatory practices (praktijktest) and that is politically controversial in Belgium: she created LinkedIn profiles using her own (Kenyan) name, and her husband’s (Belgian) name. In the latter case, she was approached by headhunters, while nobody reacted to the first profile. The same interviewee also experienced how intersectional discrimination works: on the basis of her being a woman, and someone with a different physical condition. Yet she is highly skilled and educated.

We documented several devastating stories of exploitation in the workplace. There was the Filipina domestic worker who experienced wage thefts and wage deductions, having to work without breaks or holidays, and sexual harassment. There was a Central African women who fled violence in her country, only to be forced into prostitution upon arrival in Belgium. She escaped with the help of the church and works in the fruit sector, where she only gets day contracts because she has a physical disability as a result of the violence she suffered back home.

Some migrants have endured horrible living and working conditions over very long periods. Yet most of them stay and do not envisage to go home. The most cited reason is that working in Belgium provides them with financial means to support their family back home. Even when parents miss their children dearly, they are motivated by the ability to give them a better future. As one student put it, the temporary unfreedom of the parents/migrant workers provides expanding freedom for her children on the other side of the world. They are getting an education, saving for a house, and planning to buy a car for their newly opened small business.

Finally, we reflected on the possibilities for social upgrading. These can be situated at the individual or collective level, at the national or international level. At the individual level some few interviewees had the opportunity to follow a training or a language course in Dutch or French, which helped them a lot. Some also received help from organizations such as Fairwork Belgium, or the church, which helped them to stand up for their rights. Yet there are several structural barriers to social upgrading that must be lifted. Many migrants we interviewed felt that receiving a residence permit is the first necessary step on any path to social upgrading. As one interviewee said: “Paper is life. If I have my paper, I can do what I want – I can borrow money, buy a house. Anything.” Changing this requires fundamental political changes and governments to provide papers to migrant workers.

1These blog posts are based on essays written by 12 students in the Master in Globalization at IOB, as part of their assignment for the subunit Global Organization of Production. The posts are collectively authored by the 12 students and the lecturer and may reproduce parts of the original essays.