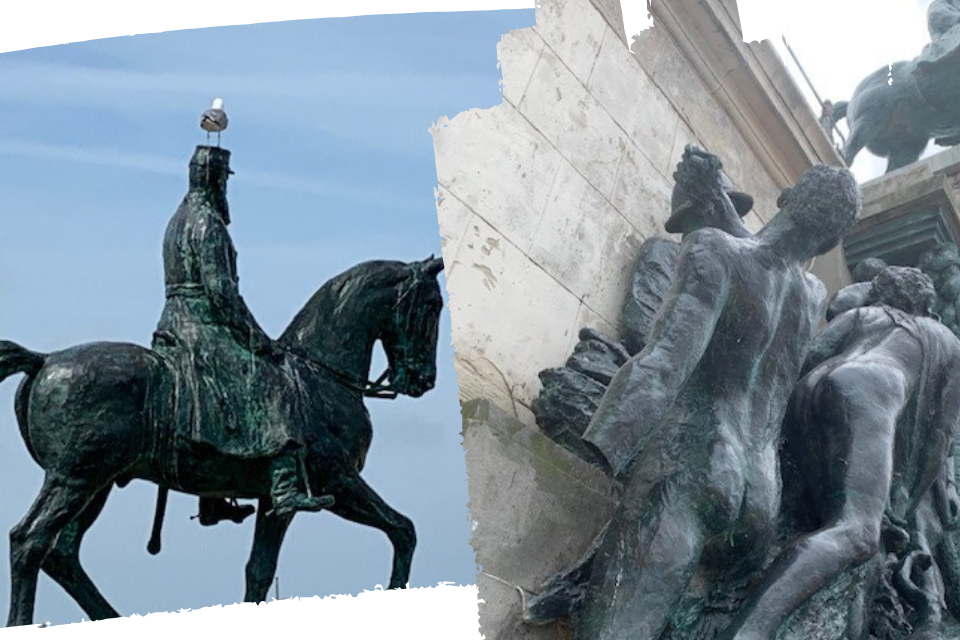 In the wake of the ‘Black Lives Matter’ movement,  outrage in Belgium also flares up about the country’s role in its former colonies. It would indeed be good if Belgium could come to terms with its colonial past and face up to its own blind spots of discrimination. Hence the question mark in the reference to our national anthem in the title.

In this slipstream  of world-wide indignation , the African diaspora is also denouncing discrimination in our society today. In order to bridge the gap between word and deed, following the expressions of regret by King Philippe, the Belgian Parliament has now also taken the initiative and set up a Congo Committee to investigate how this can be done (pdf). Are expressions of regret from the Belgian government, or from the King about the role of his ancestor, enough? Who should they be addressed to? To the authorities of today’s Congo, who are not working convincingly on the present? To the population, then? But is this not too vague and non-committal? How is reparation for committed injustices even possible? Is there, then, a need for reparations? Has only damage been done, and how do you account for this? If so, who should be compensated and how much?

With much opposition and discussion about who is now entitled to talk about these questions and act as an expert, the committee has started, but surely the Belgian Parliament is where the discussion belongs[i].

In the heat of the rediscovered indignation, however, some nuance and context are lost. A second reason for comments in the margin of that committee is, if we want it to be more than a mere symbolic gesture, how we come to terms with that past and with different identities and discrimination in our society, and above all, how we can meet the needs of Congo today. After all, the country is suffering a new cycle of overexploitation of natural resources. A narrow political elite is reaping the benefits and the population is being left out. I wish there were as much indignation about this.

A country changing from an agrarian circular economy to a capitalist one always goes through a painful process of destruction and creation. Western countries were able to spread that process of social disruption over more than three centuries, but most developing countries had only a few decades to adapt. The process took the form of colonialism, which in many cases led to the destruction of local cultures and the decimation of populations in Latin and North America, Asia, Australia and Africa.

In Congo, too, this annexation in the new world system was violent, especially in the first part of the colonial era, that of Leopold II (1885-1908). Prime Minister August Beernaert summarised this period well in 1908, when he wondered what had been achieved: ‘En Afrique, rien. En Belgique, des travaux exclusivement somptuaires’. (‘In Africa, nothing. In Belgium, only exorbitant works.’) Historian Guy Vanthemsche rightly remarked that in the context of inter-imperialist competition, the death toll has been vastly exaggerated without any firm statistical base (De Standaard, 23 February). He stated that in that period hundreds of thousands of people had died as a result of war, forced labour and imported diseases, rather than 10 million or 13 million. But whether we are talking about half a million deaths or 10 million, the brutality, untold suffering and humiliation remain.

The same exaggerations circulate about the enrichment of Belgium, which is said to have been built on the exploitation of Congo. The estimate of the net flow of financial resources during the period of Congo Free State was about 32 million gold francs or about 192 million euro today[ii]. That does not represent 0.1% of the national income in 1908. By way of comparison, Belgian shareholders’ losses on Russian investments in 1919 amounted to 3.5 billion gold francs, one hundred times more. Although per capita income in Belgium doubled during the 75 years of colonisation, it tripled in the forty years after Congo’s independence (1960-2000). It is therefore necessary to make a nuance about Belgium’s wealth. Our economy is not only built on Congo.

Nevertheless, Belgian enterprises reaped the economic rents created by colonisation. During almost the entire formal colonisation period 1908-1960, the annual return of Belgian companies in Congo was systematically higher (7.18%) than that of all other equity on the Belgian Stock Exchange (2.87%)[iii]. However, this does not fully reflect the costs and benefits of colonisation. The development of industry, the labours of the native labour force, but also the commitment of Belgians in education and health care and other public investments in Congo, did make the colony the second most prosperous country in Sub-Saharan Africa. However, the wealth was very unevenly distributed. Foreigners, 1% of the population, held 99% of all capital, and the infrastructure was geared more to the needs of the metropolis than to those of the indigenous population. Above all, however, the indigenous population experienced apartheid and powerlessness as particularly humiliating.

[i] It is incomprehensible that Isidore Ndaywel è Nziem is missing from that committee. Not only is he the author of the most important historical work on Congo written by a Congolese, Histoire générale du Congo (1997), 955 p., but he lives and works in Congo and is the driving force behind a movement for more democracy.