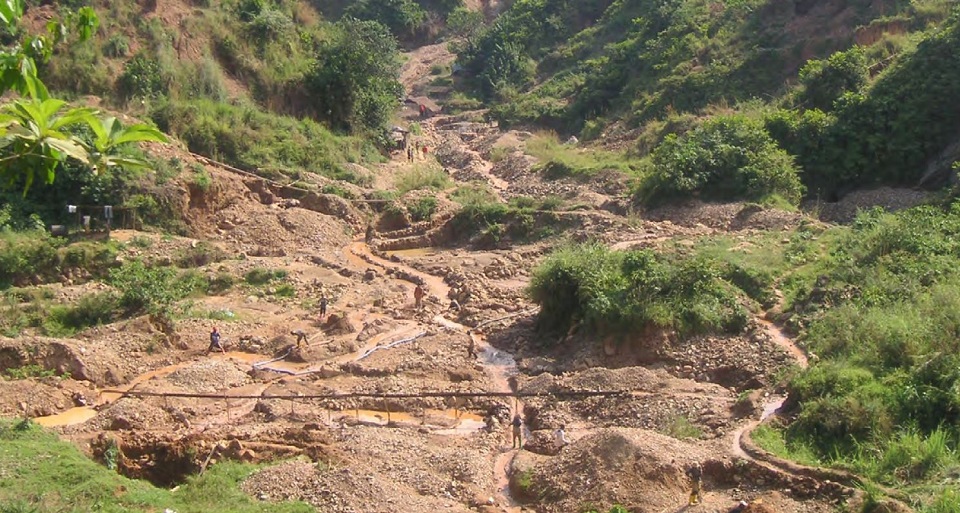 There is strong evidence that mining activities fuel local conflict. However, so far no distinction has been made between the two main modes of mineral extraction: artisanal and industrial mining. Making this distinction is important: while policymakers cannot change the location of minerals, they have decision power over the extraction mode. In a recent paper, we find that the mode of mineral extraction, as well as their interaction, have very different implications for local conflict.

We focused our analysis on the eastern part of the DR Congo – which is well-known for its mineral deposits, mainly gold and the ‘3T minerals’ (tin, tungsten, and tantalum). It was also home to the two Congo wars, and
remains one of the most rebel-infested regions in the world. After the formal war end, industrial mining reemerged in DRC, under the impetus of the 2002 Mining Code and 2003 Mining Regulations (pdf). Enticed by both the attractive fiscal conditions and the commodities super cycle, industrial concessions in Eastern DRC increased from just 237 in 2004 to 3,700 in 2015.

Miners vs. Rebels or Companies: Taxation or Relocation

Currently, an estimated 382,000 artisanal miners (pdf) are digging for minerals in Eastern Congo, in 2,700 mining sites. In about 35% of these sites, armed actors like rebels or government soldiers (pdf) are present. They profit from artisanal mining through illegal taxation, but also by monopolizing the sale of certain commodities (e.g. beer, cigarettes or palm oil), forcing artisanal miners to work for them, or simply pillaging.

According to the Mining Code (pdf), artisanal mining should take place in clearly demarcated Artisanal Exploitation Zones (AEZ). However, very few of such zones were created. As a result, we find that only 1% of artisanal miners operate in an AEZ. The vast majority operate illegally in industrial concessions. Frequently, this leads to tensions and (violent) protests, especially when largescale mining companies move from the research to the production phase, often entailing the relocation of local communities, artisanal miners and the armed actors taxing them.

Both extraction modes, as well as their interaction, lead to different forms of violence

We find that a rise in the value of artisanal mining sites leads to increases in battles, attacks against civilians and looting, indicating competition between rapacious armed groups: armed actors intensify their fighting efforts over the increased value of artisanal extraction sites.

In contrast, a change in the value of industrial sites has little to no effect on conflict. Our interpretation is that companies are able to protect their concession against rapacious armed groups (with the help of private security forces, but also the Congolese Mining Police and Congolese Army). In line with this protection effect, we find that the expansion of industrial mining decreases the incidence of battles between armed actors.

However, a move to the industrial production phase increases the incidence of riots, reflecting actions by local communities which are negatively affected. Moreover, in cases where industrial production activities expand
into areas that are already in use by artisanal miners, we find an increase in attacks against civilians and looting. These dynamics suggest that individuals who previously profited from artisanal mining, whether they are armed actors or artisanal miners, turn to alternative sources of finance like looting and attacking civilians.

Governments and policy-prescribers (e.g. the IMF and the World Bank) tend to favor industrial mining over artisanal mining because of its superior fiscal revenue-generating potential for the central government. While the relation between mineral price increases and local conflict at artisanal sites – and its relative absence at industrial sites – may add to the arguments of those who seek to replace artisanal by industrial mining, there are two important considerations.

First, a major difference between artisanal and industrial sites is that mining companies, being backed by the government and national army, are able to secure their concessions. This is however a political choice; there is nothing inherent about artisanal sites that prevents the same type of security.

Second, our results emphasize the need to think carefully about the costs of expanding industrial mining. Worldwide, the livelihoods of more than 100 million people depend on artisanal mining, with up to 20 million living in Africa. Any policy to expand industrial mining should therefore incorporate measures that protect local mining communities and mitigate unintended economic and social effects, including the effect on the behavior of armed actors.